Integrity of Elections in Canada and the United States 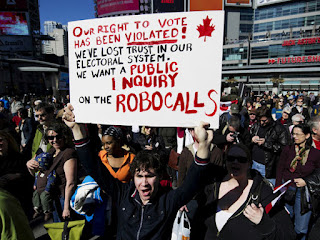 The Canadian Situation on Voter Fraud
Election fraud has become a major issue in Canada. There have been allegations of the Conservative government affecting vote results by using robocalls (automated calls) to send voters to a different polling station. The issue is presently under investigation by Elections Canada.
"OTTAWA — The IP address used to send misleading robocalls to Guelph voters on election day was the same address used by a worker from the campaign office of local Conservative candidate Marty Burke, Elections Canada investigators believe.
The Internet Protocol address — like an Internet phone number — was used by campaign worker Andrew Prescott to arrange legitimate calls through RackNine, the Edmonton voice broadcasting firm.  Full Story@allvoices.com
Posted by albertacowpoke at 09:03

albertacowpoke
I am a retired military officer with 35 years service to my country. I have lived or worked in every region in Canada, including the northern territories. I am proud Canadian and Albertan. Interested in politics,military and veterans issues. One of my hobbies is horses and have done some horse training and breeding over the past 25 years. While I still have six horses, I no longer breed and raise foals. Something to do with a few broken ribs from time to time.